First trip to Africa! And if you don’t count the four separate cases of food poisoning between the two of us, it was pretty damn awesome. We flew into Casablanca and took a train to the center of town. Our poor language skills were apparent immediately. It took way too long to find our hotel, which ended up being what should have been a five minute walk from the train station. Central Hotel welcomed us to a nice small room overlooking the town square. Casablanca was less than desirable, except for the super impressive Hassan II Mosque which was grand in scale and extremely beautiful. A true example of the powerful faith of the Muslim world.  Casablanca was also my first taste of what Morocco had to offer as far as markets and souks, endless mazes of awesomeness and photo ops.
We took a train to Marrakesh, which is where the fun really began. We paid a young kid to take us to the Riad we had chosen through the labyrinth that is the old town. Lucky for us, it was full and we ended up stumbling onto a hidden gem called Riad Al Nour. The place was absolutely gorgeous. We started to get to know the owners of the riad, which turned into an experience of its own. We ended up staying there for the rest of our time in Morocco. These fantastic people turned into good friends and the riad a home away from home. The markets, souks, people, and the beautiful city drove us to cancel our plans to visit the north of the country as we had already found everything that we were looking for.
It is a very real fact that knowing someone local in the place that you are visiting opens lots of doors. And I think that especially Lindsey found a lifelong friend on this particular trip. They took us out to dinner, taught us how to cook in a tagine and helped us to visit some of the surrounding cities.
We took a trip to Essaouira, a beachside town several hours away that is famous for its relentless wind and beautiful coastline. We met up with a Spanish ex-pat whom had been living in Essaouira for several years. He eagerly showed us around his beautiful town and spent several hours as a tour guide. We went to a fantastic street side seafood restaurant and ate to our hearts content. Apparently portions of Game of Thrones have been filmed there, much to Lindsey enjoyment. It was an amazing day.
We also visited Siti Fatima, a city high in the mountains that is home to the owners of Riad al Nour. We were introduced to some of their friends and family, and took a beautiful hike to a waterfall, and then through the hand built homes of our new friends.
Morocco has a very special place in my heart now. A country of immense religious faith and a strong cultural identity I was enthralled with every step. This is the world of snake charmers, tree-climbing goats, and surprises at every turn. What an amazing place to visit. Just be careful what you eat… 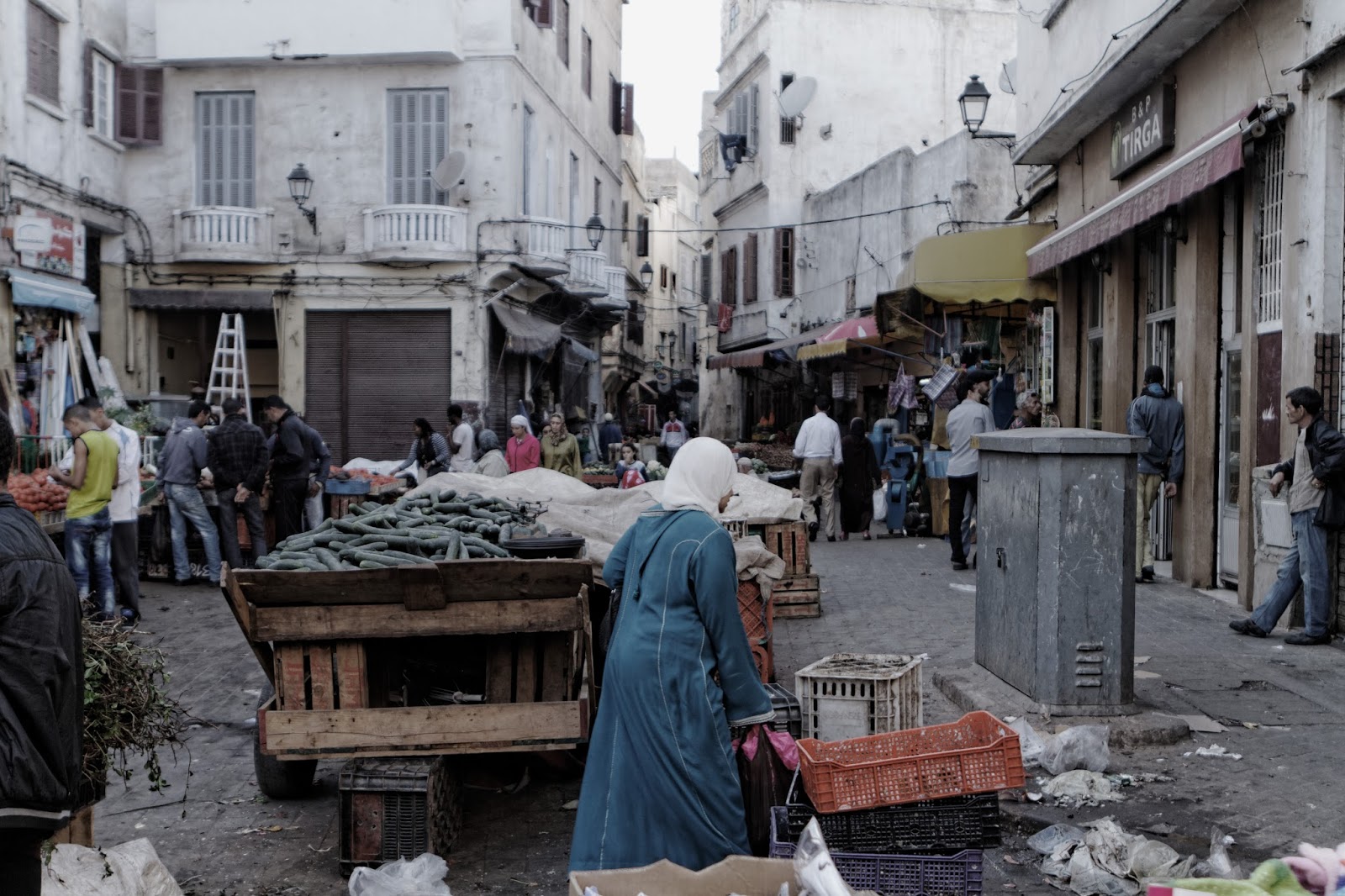 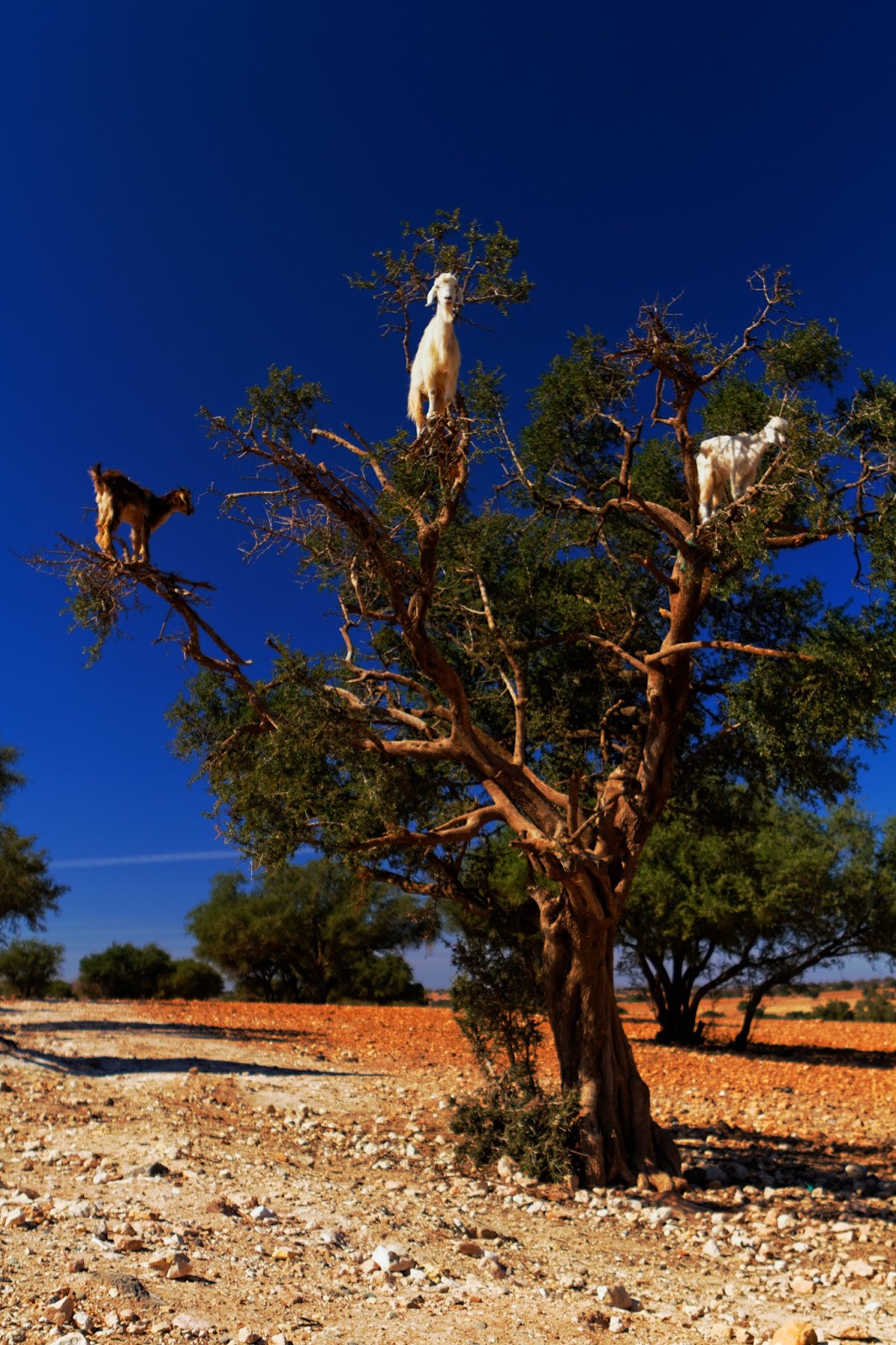 Not too long ago, Tunisia was a complete mess. In 2011, it looked a lot more like the current state of Egypt than a thriving and developing small country. Following long protests, a revolution overthrew the president Zine El Abidine Ben Ali from power. Police still line the streets; razor wire and tank-like trucks remind everyone of the past. An unstable feeling sets in right away and only leaves when your plane takes off at the end. A somewhat expensive country, money centered, fashion trended, but a certain charm is still there. Tunisia still has a long way to go as it tries to define itself.

Certainly worth visiting, but it was far from my favorite place in the world. Tunis, a big ugly concrete block of a city, was easy to leave. However, we stayed several nights in Sidi Bou Said. It’s a beautiful blue-roofed city on the side of a cliff overlooking the Mediterranean.  Great seafood and shawarma filled our tummies and the beautiful hotel didn’t hurt. We visited Carthage and the fantastic ruins of the city. A couple of days in Tunisia can serve any trip just right. 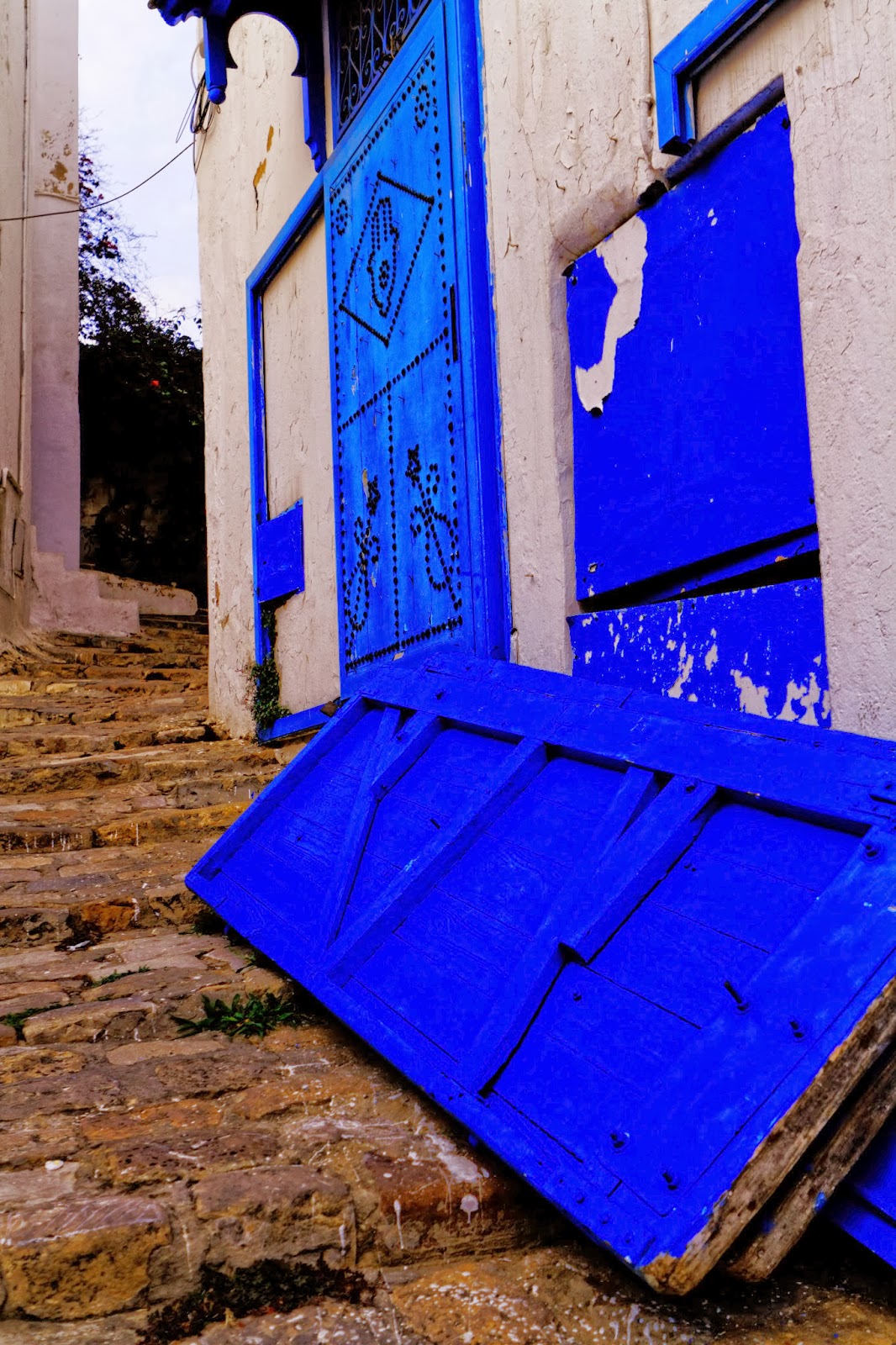 Posted by Unknown at 6:32 PM No comments:

Minneapolis-Saint Paul, Minnesota. AKA The Mall of America

Here we go. Everything I hate about America wrapped up into 4.2 million square feet of hard core American consumerism. Over 520 stores full of nothing that anyone would ever need. Disgusting. Of course I had to go. A theme park inside the mall? Talk about over the top. The mall has its own hotel, and several others close by. Which makes me realize that people take vacations to Minneapolis just to go to the mall. Makes me cringe.

And it was everything I ever dreamed of. A ton of bullshit stacked on top of other mounds of bullshit. A shrine to the money gods. A symbol of the worst of what America has come to. The very reason why the downfall of America is imminent. At one point, facing each other like heavyweights for the title, the microsoft store stares jealously across at the Apple store, mimicking their beautiful success and wondering why noone is walking through the door. Weird radio waves fly back and forth between the two stores and push unfortunate consumers brains back and forth.

Atleast I was able to walk off the huge BBQ Bacon Bison Burger and fries I had at Hell's Kitchen earlier that day.
Posted by Unknown at 8:03 AM No comments:

I grow to love Chicago more every time I visit. By my count, i've been seven times now, and each time gets a little better. I started off visiting with my father almost a decade ago. We would go for the week between Christmas and New Years to enjoy some family time. My father loves the city. Jazz clubs like Andy's and fine cigars take him to his happy place.
Luckily, my very good friend and roommate Ben from China now lives back in Chicago, his home since birth. What better way to explore a city than to have a local at your side? Luckily Ben is as interested food as I am. He's taken me to some amazing spots around the city, and promises more when I return. From what I can tell, you could eat at a new fantastic restaurant every day and never finish the list. He also took us to a home brew competition, where three amateur brewmasters have a quarterly beer brewing competition. What a fantastic idea. In fact, now I have four very good friends from my past living in Chicago, all from Cirque and Dragone. It's quickly becoming a second home.
In fact, one of my current co-workers family also lives in Chicago. They offered us amazing hospitality last time we were in the city. John's father is an attorney, but spends most of his free time making and bottling his own wine with his neighbors. We were fortunate enough to spend a night in the wine room, stirring the must and sampling glasses from years past.
Chicago is one of my favorite cities, and while i'll never love it as much as New York, it is much easer and cheaper to visit. It's slower, less crowded, and much more accessible. I've driven to and rented cars in Chicago many times without much hassle. What a prohibitive nightmare that would be in New York. It is, without a doubt, my second favorite c
ity in the country. The museums are world class, the pizza is just as good as you've heard it is, and there's never a lack of things to do. If you've never been, Chicago is a real treat, local friends or not. 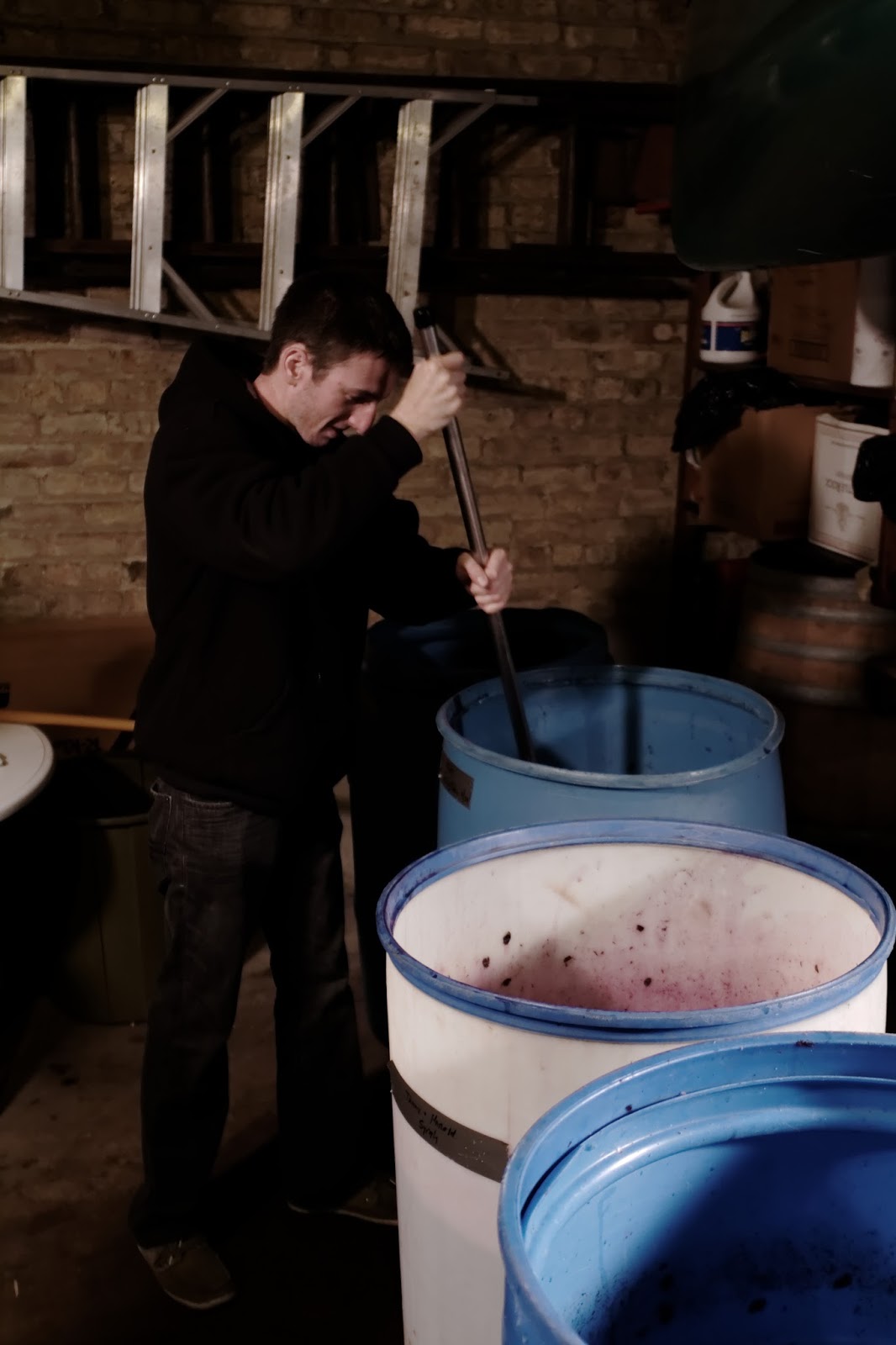 Posted by Unknown at 7:46 AM No comments:

A lot of time in the car can be well worth it when these beautiful places are all within a days drive. We recently spent two different weekends exploring the eastern coast. I have always loved what the US has to offer on this front. I've never cared much for the gulf, but places like Charleston, can be strikingly pristine. Embarrassingly enough, I had never really been to Savannah. Just as I expected, I fell in love right away. A peaceful, relaxing aura floats through the air as the locals smile and wave. (Unless they happen to be driving.) And catching up with old friends is always refreshing. And seafood, seafood, seafood.

I have always loved Asheville, and am lucky enough to have some incredible friends there. And a beautiful, private beach house in the Outer Banks is always a huge plus. I typically don't travel for relaxation, but sometimes sitting in a hammock for several hours is exactly what the ever conflicted soul needs.

Sometimes the hospitality of people surprises me. It's easy to lose hope in humanity when you see what happens out in the world. And then someone will open their home up to you and faith is easily restored. And when those people happen to be absolute culinary masters, the body smiles as much as the heart.

It's often easy to overlook the things within your area. But wherever you are, I bet there are some pretty postcard worthy things within a days drive. Save up a little gas money and get in your car on a day off. If you're willing to sit behind the wheel for a little while, there's something beautiful out there that's waiting on you to show up.
Posted by Unknown at 2:36 PM No comments:

Unfortunately, when you travel for a living, you don't always get to go to amazing cities or do amazing things. It often inadvertently looks like a glorified lifestyle. If you were to watch Anthony Bourdain, you would think has an amazing life all day, every day. But you only see a small portion of what he does. He would be the first to tell you that a lot of time is spent in airports, bus stations, trains, cars, and mostly hotel rooms. A lot of time is spent waiting. And Waiting. But he would also probably tell you that he has the best job on earth.

Sometimes a place surprises you. A few weeks ago, I had never heard of Lubbock, TX. Now i've been living here for three weeks. There isn't much to the city. 200,000 Texan's scrunched into a small area that exists for oil. The activities, museums, nightlight, etc, barely exist. But the food has surprised me. I've had fantastic pizza from "One Guy From Italy" been to a great micro-brew called Triple J "Chophouse and Brew Co," and had great Vietnamese, Mexican, and the best Korean food i've had since Seoul.

It can often take quite a while to find the charm in a small, or unknown place. Sometimes, you never find it at all. But sometimes the fantastic food makes all the waiting worth it. Not a single person I know from home has ever experienced the painful late night bathroom trip after eating at "Seoul Korean Cuisine." And i'm perfectly okay with keeping that experience all to myself.

The lesson here is, if you see a sketchy looking restaurant that looks like it's about to fall down, stop and eat. It's probably a lot better than where you were headed. You might get burned a few times, but  leave Applebee's behind. In fact, don't ever go there again. There is ALWAYS something better.

Posted by Unknown at 5:34 PM No comments: