What started as a plane ticket to Thailand would soon turn into a lifelong trio friendship. Myself, Brett, and Steve flew to the second largest city in Thailand, Chiang Mai. We were to do a tour of the country, North, Central, and South. After a few days of exploring Chiang Mai, visiting night markets, local watering holes, late night cricket snacks and funny hats, and even a festival celebrating a burning temple, Brett got the bright idea to rent motor bikes and drive 6 hours (while carrying our oversized, overpacked new backpacks) on one of the curviest roads in Asia to a small town in the North of Thailand. Neither Brett nor Steve had ever ridden a motor bike before, so I spent about an hour giving them a beginners lesson on the street outside of the rental shop.

We started the journey in the unbelievable Chiang Mai motor bike traffic and finally, somehow through the alignment of the stars, got on the back roads. After the first hour, my back was throbbing from the weight of the backpack. As we drove through the mountains, I saw a sign for a "waterfall and swimming hole." We stopped and took the short hike, expecting a tourist trap. What we found instead, was the most beautiful, perfect waterfall I had ever seen. We went for a swim. The water temperature, Perfect. I could have stayed at that waterfall for days. 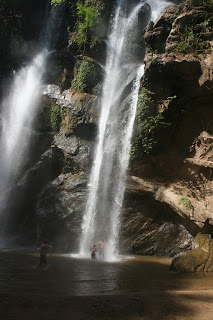 After our swim, we were feeling fresh and on top of the world, ready for the trek ahead. Steve was feeling comfortable and decided to forego his helmet for a set of headphones. We rode on. Soon the road curved and twisted more and more. The embankments became steeper and steeper. Brett was leading and I was in the middle. After about 20 minutes, I realized that I hadn't seen Steve in quite a while. I started to worry. I passed Brett and stopped at a roadside pull-off to wait. We waited for quite a while and finally decided to go back and look for Steve. We had no means of communication, no back up plan, and no idea what we would do if we had lost him. Luckily the road was with very few turn offs. About 10 miles back, we found him sitting on the side of the road, his bike in the ditch, headphones smashed. He had laid the bike down in a small ditch, glasses flying off his eyes. Luckily he was ok, only scratched up. Even more luckily, his bike still worked and his glasses were in tact. It would have been a damn long ride with two of us on one bike, and three backpacks on the other. (And probably would have resulted in another wreck). Steve put on his helmet and we continued on.
We finally pulled into Pai (pronounced Bai) a few hours before sunset. We found an amazing bungalow retreat set to a beautiful mountain backdrop and rented three side by side. 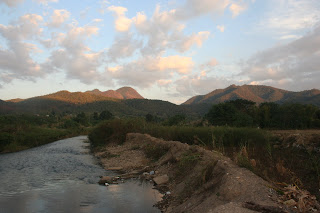 Pai was a beautiful and enchanting village. We stayed several days and met some lovely people. One night we were walking to get dinner and passed by a pig farm. It was the first time I had really seen an animal being slaughtered. The noise of the pig squealing was awful as its owner beat it to death with a baseball bat, blood splattering on his clothes and face.  Soon after, we ran into a pack of viscous dogs. They ran at us, snarling and barking as if they were rabid devils. I thought we were in for a serious hurting, but we were able to slowly back away and return the way we came, my heart in my throat. As we passed back by the pig stable, all of the pigs lay dead in their slots, sans one young pig. It was the first and hopefully last time i'll ever have to hear a pig cry. We christened the road "Evil Street."

We bought floating lanterns and decided to send them off at our bungalows. I lit one and sent it up. I quickly realized that apparently I didn't hold it long enough (they need time to heat the air so they can float) as it floated right back down onto the roof of my bamboo bungalow. I was able to grab a stick and push it away before the whole thing went up in flames. 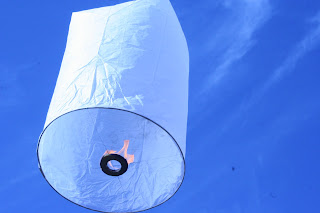 After several days in Pai, we started our ride back to Chiang Mai. About three minutes before we were going to leave, Brett decided it was time for HIS motorcycle wreck. He had run to the store and on his way back, slide about 30 feet, covered with raw bloody elbow scars and pissed beyond belief. Breakfast would come before the ride.

We flew to Bangkok and would take a bus/ boat combination to Koh Tao, a beautiful island off the Southeastern coast of Thailand. We had almost a whole day in Bangkok. We visited the famous backpacker section of Koh San Road. Due to the peaceful tranquility of Northern Thailand, we were quickly over the pollution and crowded atmosphere of Bangkok.

Koh Tao immediately brought all of the feelings of a picture perfect postcard running into my eyes. It was absolutely stunning in every way. Crystal clear water, beautiful women, hawkers walking around selling fresh cut mango and pineapple, the life. We took a taxi boat to our first hotel, Mango Bay. It was nestled away in a beautiful alcove of the island, hardly accessible by any normal means of transportation.

We spent the next week exploring the island, hanging out with our other co-worker Mo, getting bamboo tattoos, and relaxing. We found the most amazing bar in the world and moved in (literally). We spent Christmas sitting in the calm water of the Gulf of Thailand. New Years was celebrated on the back patio of our new home, watching the stars, drinking mango shakes and coffee, and watching the world go by.

Our trip to Thailand was magical. It was absolutely amazing and it changed my life forever. This is only a small portion of the experience we had together. If I wasn't ready for the world beforehand, this is what really did it for me. Time to explore.
Posted by Unknown at 6:18 AM No comments: