The longest, most miserable flight experience of my lift was finally over. 39 hours of travel time is about enough to make anyone change their mind. The drive from the airport to the hotel took about an hour and a half, and I was mesmerized the whole time. Anyone's first trip to Asia will take them to a strange place in their head. The combination of the time change, lack of sleep, lack of food, and the totally immersive culture shock into a place that seems otherworldly is a big shock to the system.  And we would be here for three months.

Korea is where I really started to learn how to travel. The first place I really felt like I started to learn my way around and learn the local culture. Brian was of Korean decent, and his grandmother happened to live in Seoul. And she also happened to be a very wealthy and powerful woman. She took a few of us out to an amazing dinner. One day, Brian invited me on a weekend trip to an off season ski-resort and trip to Seoraksan national park, several hours drive from Seoul. We saw the big buddah, and went on a hike that left even the physically fit circus performers gasping for breath. It was way out in the country, where people act like they've seen a ghost when they see a white person. It seemed to be a first time experience for some of the younger locals.

Our show was on the 1998 Summer Olympics site, the stadium only a few hundred feet from out tent. It was cool to walk through a former olympic stadium. It hosted a design expo during our run. There were some amazing pieces and designs on exhibition.

One of the site guys had found a local place to get a tattoo. Tattoo's are technically illegal in Korea, so this place doubled as someones house. I went to check it out, and three weeks later ended up with a huge koi fish tattoo on my left leg. It took two 3-hours sessions and, I don't care what anybody says, it hurt excessively. I could barely walk. I later got kicked out of the hotel's hot tub for having a "gangster" tattoo on my leg.

I visited Gyeongbokgung palace on a day off. It was massive and beautiful. The ancient world that you always hear about was right there in the middle of a huge Asian city  I had Korean BBQ, which was to die for. We went to karaoke, which is apparently a huge deal in Korea. We had our own private room, our own hospitality crew, and anything else we wanted. We visited the massive night market, a labyrinth of endless turns and corners that would easily swallow up a person of lesser stature. We drank plenty of Soju, the Korean sweet potato distilled spirit. Soju has a mind of its own and likes to play tricks on you. One morning I was lucky enough to wake up in a casino sitting at a slot machine. Needless to say, I hadn't won.

I still wasn't as daring as I should have been with the food. I was still holding back a bit and eating American when I could.  I was easing in, but I still missed a lot of good food in Korea. However, there was a garlic themed restaurant. I certainly did enjoy that.

It snowed the entire three days of load out. Freezing.

I would love to go back to Korea. 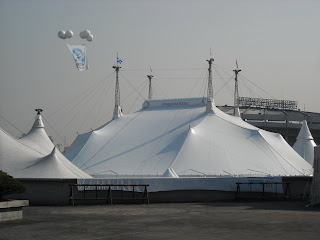 Posted by Unknown at 8:13 PM No comments: