I was floored when I saw the Andes mountain range for the first time.What a stunning city, and I had six weeks to explore it. By this time, I was well into the Cirque groove. I had moved the shows a few times, and finally started to pick up on my place and responsibilities. I started to leave my inexperienced self behind and really pick up on my career. I was assigned to the marking crew, so I spent the first five days setting points for the thousands of tent stakes that would hold the tent and other structures to the ground. I gained experience using basic surveying tools and equipment. It was a long setup for me, a little over two weeks. Most of the crew spent time exploring Santiago, skiing, or even enjoying Easter Island. But I was hard at work from day one.

Santiago was beautiful. The food was so new and fresh to me, i'm sure I spent a fortune eating. But the money was coming quick and spending easy. I wandered the city aimlessly for hours, as I had grown fond of over the past few months. I always knew that I was a loner, and a bit of a rambler, but it started to really set in.  I met a beautiful girl and went on a date to get sushi. She barely spoke English. She asked ME out, and we had a beautiful time.

On a day off, the crew went on a ski trip in the Andes mountains. I sat in the club house with one of the other tour guys, Grant, as we were both recovering from injuries. I couldn't afford to hurt an ankle again. I had already fallen on it again during load in, and it was still soft. But we went for a walk through the mountains. Stunning. It was so steep, we almost slid right down the mountain. I wish I could remember the name of where we were.

I still wasn't very good at traveling. I went to see the famous Virgin Mary statue, but I know now how much I really missed. It's a shame, but all part of the learning process. But, on the other side, I didn't actually have that much time off.  I guess i'll have to go back. I went out with the guys a few times and visited some really local places. Pickled pig testicles, plates of food I had never seen, engulfing smells, and drinks near as strong as the Tennessee moonshine I was used to. The kind of places where they stare at you for being a gringo, but are quick to accept you when they see that you can hang.  Sometimes you end up in some places that you probably shouldn't. I guess it's a shock to anyone when you realize you're in your first brothel, or riot, or protest, or bar fight, street scam, or any fresh experience of the sort. But it all made for a good experience, and I wouldn't change a thing. The time seemed to fly by.  I lived, unscathed. And then, after shutting the doors on the last shipping container (and running over a few extra hard hats with a forklift... you know, for testing purposes*) I got on a plane for the longest travel day of my entire life.  Santiago, Chile---> Atlanta, Ga---> Seoul, South Korea. 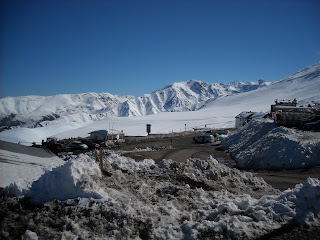 Posted by Unknown at 7:08 PM No comments: